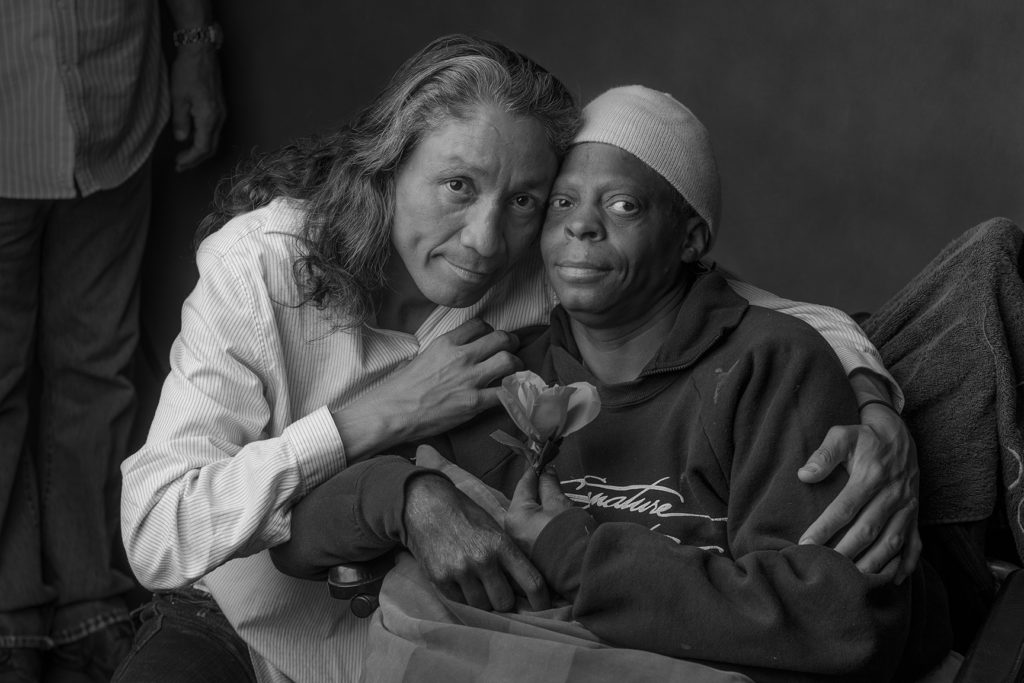 Anthony and Michelle started their relationship four years ago on the streets of Sacramento. Together, they have helped each other overcome a drug addiction and agonizing ongoing circumstances.

At the age of four, Michelle was severely burned in a house fire started by her cousin who was playing with matches. She was burned over 80% of her body and was in a coma for a week due to the smoke inhalation she sustained in the house fire. A doctor told her parents she would never walk again.

“I heard the doctors say to my mother, ‘Your daughter will never be able to walk again.’” Michelle contemplatively reflects and continues, “That’s when God said to me: “Get up!’ So, I got up, grabbed my IV and walked over to my father.”

Slowly, over the years, Michelle, a college educated mother of two, was forced into a wheelchair due to the lifelong injuries she sustained from the house fire and other serious medical problems she battles daily.

Anthony and Michelle had been living together in a tent but their tent was recently burned down. Michelle points to racism, “…because after the tent was burned, one of my hooded sweatshirts had rope with a noose around the neck of it and it was set on top of the burned debris.”

“There are a lot of racist people out there but we all bleed the same color,” Michelle says softly.

“Everything was gone,” Anthony explains. He told Michelle on the day their tent burned down, “We can’t worry about it because, it’s just material things, and we [just need to] pick it up and keep going.”

A survivor of many thefts, Anthony explains that people continually steal Michelle’s wheelchair. It’s been stolen seven times. Anthony explained that thieves have taken her wheelchair to the recycle center and try to recycle it for cash.

A few months ago, Anthony proposed to Michelle in “the garden,” a place that is special to both of them.  They plan on getting married but disagree on the timing of their wedding. Anthony wants to get a job, find a place to live and provide nice things for Michelle.  He envisions them leaving the streets when they are married.

Anthony’s social security card has been stolen many times and was stolen again recently. He is in the process of getting another card so he can start work at a restaurant and reach his goals before they marry.

Michelle pulls the Safe Grounds schedule from her purse, and unfolds the paper to see where they need to find shelter later in the evening. Safe Grounds is an outdoor site where homeless can camp legally. Anthony and Michelle bounce between Safe Grounds and Winter Sanctuary, a seasonal emergency shelter program sponsored by the County of Sacramento through the Department of Human Assistance.

Based on all her ongoing medical conditions, a doctor recently told Michelle she had seven months to live. Michelle reflects on this and conveys thoughtfully, “Only God can tell me when I’m going to die.”