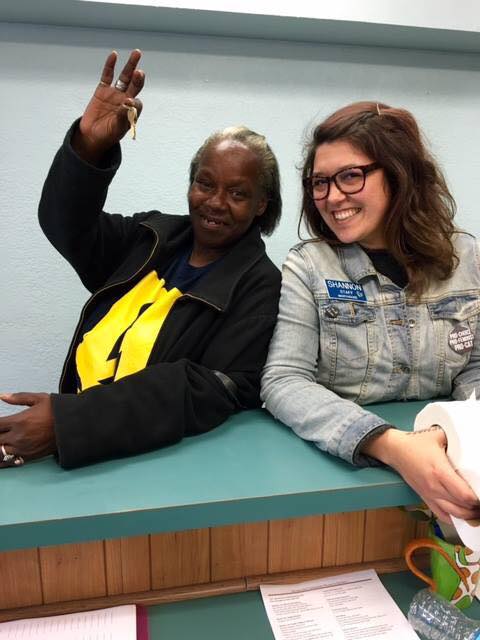 Today was my first day as Director at Maryhouse. I woke up feeling the same as any other day, tired because I dislike mornings and fiercely craving a pot of coffee. When I arrived on campus I was greeted by three of our very vulnerable guests, one right after the other; I’d like to say that I was happy to see them but the truth is I thought, “Oh this means today is going to be interesting.” Natasha, a guest I love deeply but can no longer serve as a result of the severity of her illness and addiction was walking barefoot, tip toeing around rocks, hands in fists held tightly to her chest. She was winking, as she often does and mumbling to herself. Whitney, a tall woman suffering with severe mental health symptoms was standing by the door cursing, “Good Morning, Whitney.” Her response was all expletives, wishing my demise. I am convinced that the Whitney deep inside doesn’t actually want me off this planet, but some days it’s hard to tell. Stephanie was on all fours looking into a dryer vent, growling at a staff person trying to help her. This is not a bizarre scenario at Maryhouse, it’s normal. Not the way it’s supposed to be but it is normal.

I continued with the thought that today was going to be hard and sent good vibes toward the kitchen hoping there was fresh coffee so that I could face the day humbly, openly, honestly and enthusiastically.

Coffee in hand I continued the morning at my desk relatively incident free with small moments of congratulations or comment about today being a notable day for me. I put out mini fires and answered emails but I still sat in this feeling that the day was going to be “interesting.”

My feelings made me prepare for the worst but what happened instead was this:

Linda, the sweetest 50-something year old woman who suffers from auditory hallucinations regularly was welcomed back to Maryhouse after having to take a break for behavioral issues. Linda can often be found on our back patio screaming at the top of her lungs about the children she lost in a traumatic incident that she cannot articulate. She yells loudly and aggressively at the voices that taunt her, she can’t help it. Linda suffers. Linda suffers every day at nearly every moment and she does so outside, alone and cold.

She walked in the doors, she smiled and said, “Heeeeeey girl! I’m here! Thank you!” As she thanked me she pointed in my direction and I felt what she must have, love and appreciation.

Maryhouse is a home during the day to women and children who are forced to endure the traumatic experiences of being homeless and for that reason every day is indeed interesting. How dare I think it would be anything but beautifully so. It was. It was because of Linda and all the other women like her who find rest in our doors. I’m excited for tomorrow.