Peggy Sewell’s transformation started with a cosmetic change — through Obamacare, she was able to refurbish her smile, damaged by years of meth use.

For the first time in years, she was able to smile without feeling self-conscious. Her new pearly whites inspired her to look inward and to heal what was bruised in her soul.

“I got Obamacare and my teeth and I said well now it’s time to work on the rest of me,” she said.

Peggy stopped doing drugs in 2009. When she decided to get clean, she left town to help her niece, Sunny, take care of her children in Susanville. Peggy smoked her last bit of meth en route to be with Sunny. Since then, she has quit smoking cigarettes and weed.

“I was at a crossroads and it was way past my time,” she said.  “I was at a point where I was just floating; it didn’t feel like I was living.”

On November 13th, 1979 when Peggy was driving her daughter to school, she accidentally hit a 79 year old woman who was crossing the street. The woman died after the accident.

Peggy was 24 years old. Her memories from that morning have never left her.

“I had a fix it ticket on the break light of my car,” she said. “The day before I had to drive my daughter to school, my dad asked me if I got the fix it ticket signed off by a cop and I said that I hadn’t. He told me that you just have to pull a cop over and show them your fixed lights and get them to sign off on your ticket.”

The next morning, Peggy was at a traffic light with her daughter and a cop car was stopped in front of her at the light. She was preoccupied by the cop’s presence — worried that he would stop her and see that she didn’t get her ticket signed. She had to turn left on the two lane road.

“I wanted to make sure that I wasn’t all herky-jerky so my foot was hovering over the gas and the brake and I just wanted to make sure that I got into the center lane smoothly,” she said. “There was shade on the corner. It was close to 9:00 am in the morning. So as I entered the intersection and the crosswalk, a 79 year old lady just appeared at my windshield and I said, ‘Oh my God!’ and my daughter panicked. I was afraid to slam on my breaks because I didn’t want to throw her to the street. I just coasted for about three houses and she just slid off of my car and her head hit the street. I didn’t hit her; it just felt like we collided.”

Peggy had to go to jail because she never got her fix-it ticket signed. After getting out of jail, Peggy called the hospital multiple times to check on the woman. Four hours after her last attempt to learn about the woman’s condition, the hospital staff told her that the woman “had expired.”

“I’ve been dealing with that since November 13th, 1979,” Peggy said. “I have a very strong feeling that this is one of the things in my life that has kept me on drugs for so long. I would just stay self-medicated and then Obamacare saved my life. If not for Obamacare, I wouldn’t have been able to take care of my teeth. I wouldn’t have been able to get a therapist. But, now, I have great teeth and have grown immensely. I have no desire to do drugs, but I have a strong desire to find out what I want to be when I grow up. It’s time, I’m 61 years old.”

After taking care of her niece’s children, Peggy couch surfed and saw a therapist who recommended that she enroll in a course at Women’s Empowerment. 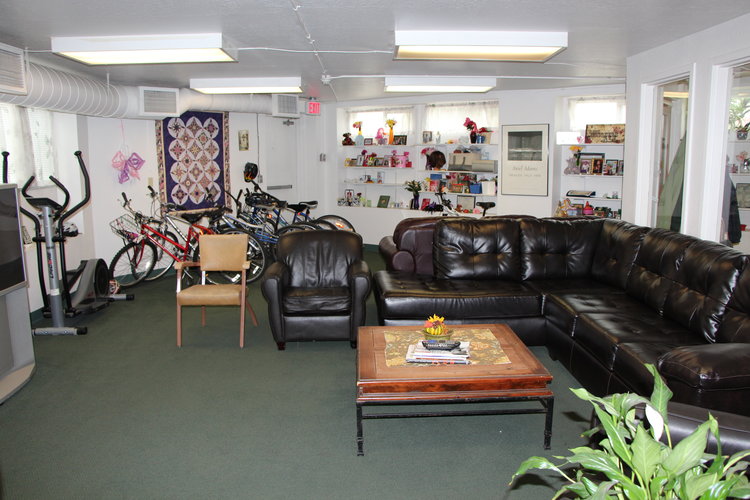 “Sister Nora’s place is a very secure, warm and comfortable place,” she said. “I’m never worried about what is going to happen tomorrow when I am there. Sister Nora’s is drug and alcohol free so it’s a wonderful thing because we are all in the same place – trying to be clean and be good to ourselves.”

“I call Sister Nora’s Place a program because shelter just seems so sad and I am not sad there,” she said. “I’ve grown leaps and bounds since I’ve been there.” 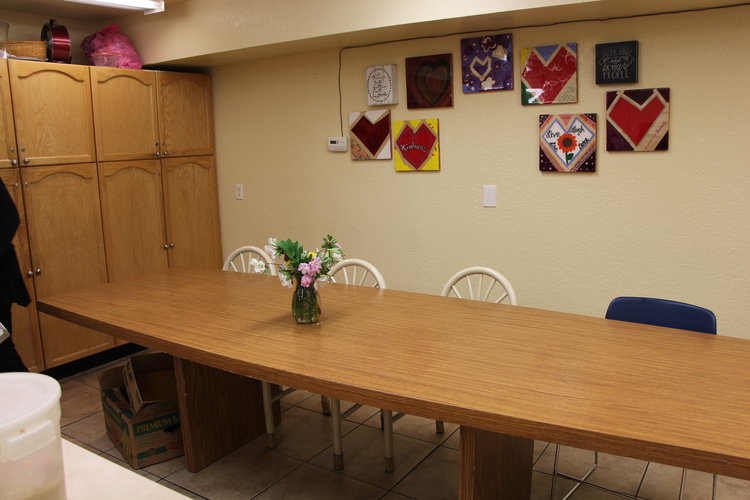 The Sister Nora’s Dining Room — every night volunteers from the community bring and cook dinner for the residents and guests of Sister Nora’s. 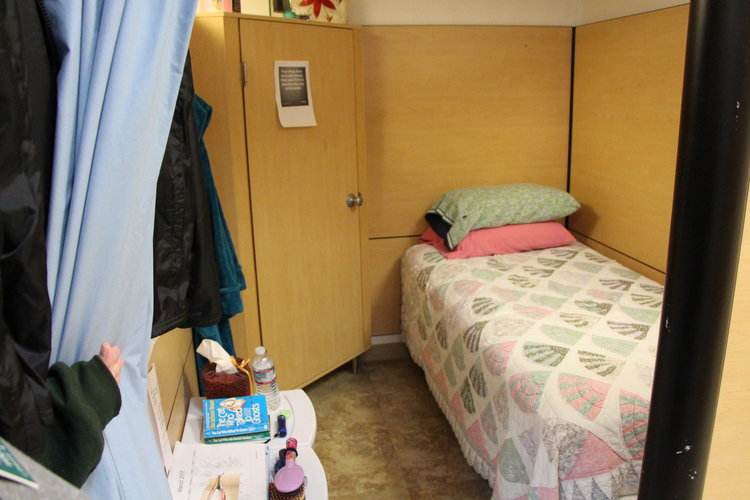 “We are all sisters,” Peggy said of her fellow residents at Sister Nora’s. “In the year that I’ve been at Sister Nora’s, we all get along. Of course, sometimes we get on each other’s nerves like old married couples. We are a great support group. I am the crier of the group so if something seems a little emotional everyone will look at me and offer me Kleenex.” 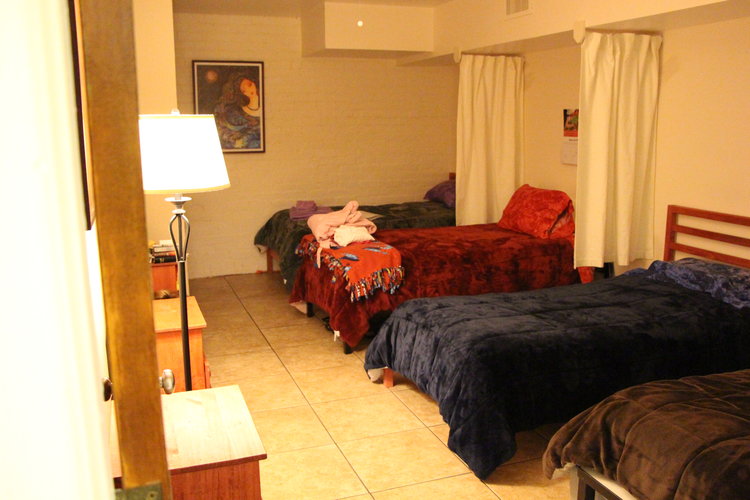 “Vince has helped me grow immensely since I’ve started to see him,” she said. “He pointed out to me – not that I didn’t know that I was holding onto something that I shouldn’t have been – that there is a name for what I’m doing it’s called OOCD – primarily obsessional obsessive compulsive disorder and I’ve been basically ruminating on 1979. I just keep playing it over and over again in my mind and it’s not going away. It will probably never go away.”

Now that she isn’t on drugs, Peggy’s memories of the accident are stronger, but with the support of Sister Nora’s Place and Genesis, Peggy feels stronger too. 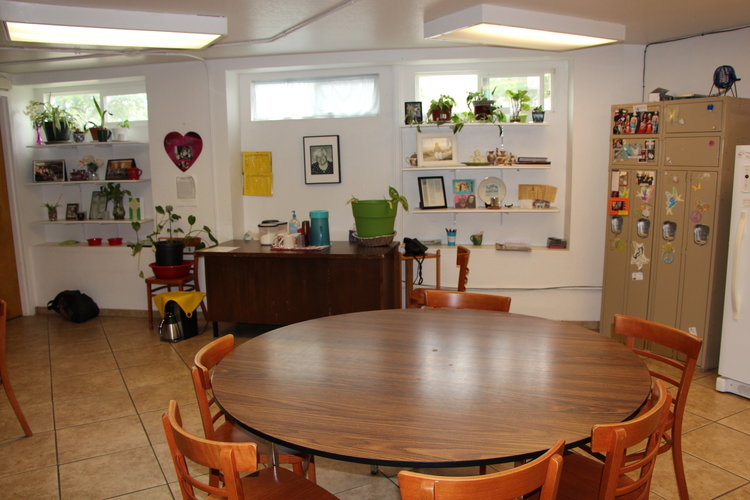 The Sister Nora’s community room (where coffee is brewed and snacks are shared).

Each weekday, she works from 8 am to 9 am at the Loaves & Fishes Welcoming Center and often works on an on-call basis in the afternoon. 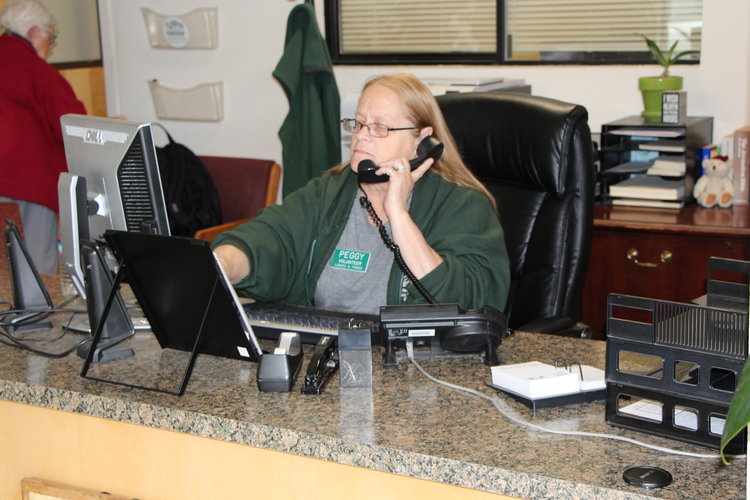 “I love it because I am being helpful,” she said. “I’m 61 years old so it is not too strenuous and I could do it for many, many years and still be able to come here and enjoy what I’m doing because no two hours are alike.”

As the receptionist for the Welcoming Center, Peggy fields calls from donors, volunteers and people experiencing homelessness in need of resources.

“This job has given me a purpose and being here [at Loaves & Fishes] has made me humble,” she said. “Last year at this time, I never would have seen myself here. My niece comes and picks me up and she says, ‘It makes me sad every time that I come pick you up from here.’ So I brought her in and gave her a tour of Sister Nora’s Place. She then understood how warm and homey it is inside. When people see my name tag, I feel like I am a part of the Loaves & Fishes family.”