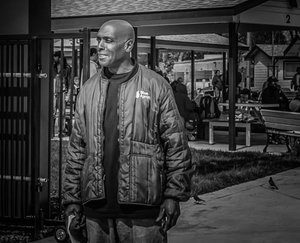 Samuel Sneed, a Friendship Park guest, just moved into a six bedroom apartment on March 21 in North Sacramento which he shares with roommates. The apartment is operated by Sacramento Self Help Housing.

Samuel speaks elegantly about God, love and the inhumanity of homelessness. His dream is to use his words to preach.

Originally from Chicago, he moved to Sacramento when his son started school as a photography major at Sacramento State. Samuel became homeless after he and his wife separated.

“My family is back in Chicago so I ended up at the Mission because I’m not one to be leaning on anyone and that’s where it started,” he said. “I did want to run back to home, but God has a way of putting everything in order.”

Samuel says that he survived the inhumanity of homelessness because he had a mission — to show those experiencing homelessness that he could do the seemingly impossible — acquire permanent housing.

“I took it upon me and my heart that someone could make it into housing,” he said. “It’s hard to get inspired waking up every day out of a sleeping bag and a tent, but I did it”

People who are homeless feel like they don’t belong to the community, Samuel said.

“They are all hurting inside from not feeling loved and being rejected from their family and society,” he said. “Because society gave up on them, they are giving up on life.”

Samuel doesn’t believe that the word homeless should be used.

“Housing is just a shelter to keep your roof over your head and home is here,” he explained as he gestured to his heart.

“Being without shelter should not mean that you are without a home,” Samuel said. “I belong to America and this is the land of milk and honey. I’m home.”

“Loaves & Fishes is God,” Samuel said. “It is Jesus Christ. This is God’s way of saying this is what I want in life – to love unconditionally. I’ve been to all kinds of churches, but I notice that right here, this is straight from heaven.”