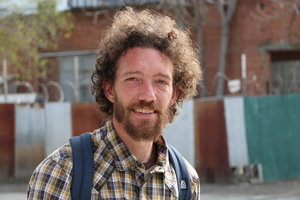 Samuel Cunningham, a current guest at Loaves and Fishes, has been homeless for the past six months.

He moved to Sacramento from Nebraska after he rekindled his relationship with his father who he has been estranged from for 27 years.

In Sacramento, Samuel pursued a welding, machining and engineering program, found love and got to know his father, a former Hell’s Angel who now is clean-shaven and works at a thrift store. Samuel supported himself by driving Lyft and rented an apartment in South Sacramento.

When he wanted his fiancé, Kaya, to move in with him, he had an argument with his roommate. After that, his car was stolen along with his social security card and birth certificate.

The event spelled the couple’s descent into homelessness and the disintegration of Samuel’s relationship with his roommate.

For two months, the couple lived out of a tent that Samuel’s father purchased for them in South Sacramento and quickly ran through their savings and monthly allotment of Calfresh dollars.

“When you are homeless, you don’t have a kitchen to cook in so it is amazing how fast your money for food goes,” he said. “We didn’t have any place to store food so we’d just go to the gas station and the dollar store and buy small packages of lunch meat, loaves of bread, snacks and drinks. When we ran through food stamps, I started collecting cans. It was pretty rough.”

A few of the couple’s friends would invite them over for dinner in exchange for Samuel’s mechanic services.

“I have 20 years of experience as a drywall contractor, but no one will hire me without an ID or a birth certificate,” Samuel said.

Samuel has worked since he was fourteen years old. He has often worked construction jobs during the day and then managed a variety of businesses including a McDonalds, a gas station, a bar and a movie theatre in the evening throughout his career.

“I was raised by my step-dad who was a Navy Seal, he taught me the merit of hard work,” Samuel said. “I’d love to take any job I could get even though I haven’t worked for minimum wage since I was 14 years old.”

Samuel and Kaya didn’t discover Loaves and Fishes until they had lived on the streets for months. The discovery of the homeless survival center has made their lives easier.

“The features that Loaves and Fishes offers are really awesome,” Samuel said. “It so wonderful to be able to get a backpack, camping gear, tarps and coffee at Friendship park. A lot of the staff is really friendly and truly goes the extra mile for you. Cycles for Hope  comes here to fix bikes and occasionally gives bikes away.”

Through the Street Sheet, a homeless resource guide, that Loaves and Fishes hands out, Samuel and Kaya have learned how to maximize their resources. On weekdays, they get breakfast at the Cathedral of the Blessed Sacrament, lunch in the dining room of Loaves and Fishes and dinner at Union Gospel Mission. They also grab food to eat on the weekends at food pantries.

“We only qualify for $185 Calfresh dollars, but if you manage that money wisely, it can last a long time,” he said. “We shop at Grocery Outlet and the 99 cent store to save money.”

“I joke around and say that being homeless is kind of like being on vacation, but a very sucky vacation,” he said. “You don’t have worry about bills, but you have to deal with some people who are difficult people. I have OCD so I like everything to be neat and organized, but not everybody feels the same way that I do. The police just moved us from the river to a lot behind the casino and said that if we keep it clean, we won’t get arrested for being there. I police the area and pick up the mess that other people make and because of that sometimes people get angry at me for being in their space. If you get camping tickets, you have to do community service and after so many tickets, they take you to jail and you can’t get any of your stuff back for 90 days. I feel lucky that I’ve never gotten a camping ticket.”

Samuel likes to keep busy by engineering and designing bike carts. He recently built a 6-foot-long bike cart that has a dog kennel in the back. He charges others $25 an hour to build the carts which he can quickly assemble.

He is currently working with a navigator from Sacramento Steps Forward who he met at Loaves and Fishes. The navigator is helping Samuel acquire his social security card and birth certificate.