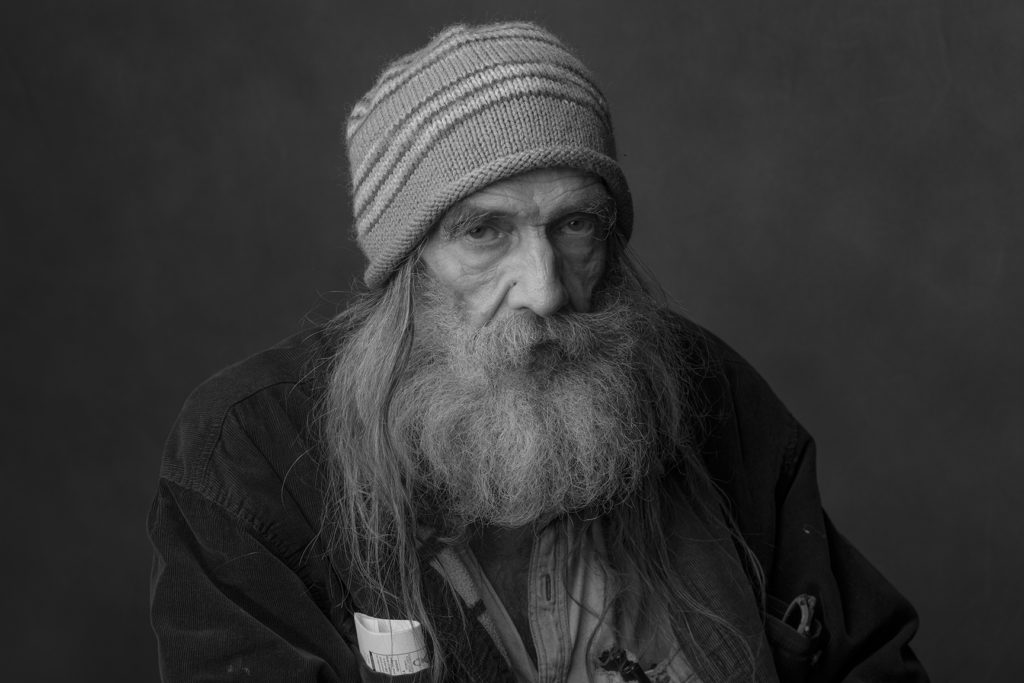 He was diagnosed with lung cancer at Sutter hospital, three months before this portrait was made. His fragile health blocked hospital staff from discharging him back onto the street. An unnamed organization, not affiliated with the hospital, stepped in to “help” Elden. Wearing large crucifixes and carrying Bibles, they approached Eldin while he lay medicated, groggy and recovering from treatments in his hospital bed. They proposed to help him with his medical care and housing. All Elden needed to do was sign their paperwork and instead of eventually going back to the street, he could leave the hospital and go straight into a warm room and a soft bed. They promised to provide him with meals and offered transportation to and from his doctor appointments and cancer treatments. Elden was relieved and extremely happy to have access this type of help. Using a clipboard to steady the paperwork, they passed Elden the clipboard and a pen. He signed every piece of paper they handed over to him.

Unfortunately, everything promised to Elden was a lie; manipulated trust powered by greed, a fiction of the most evil kind. Six weeks later Elden was homeless again. All his belongings had been stolen by the “people” who said they would help him. His wallet containing his ID was stolen too. They were able to gain access to his SSI payments and bank account through the paperwork Elden had signed. They began to drain his money and steal everything he had acquired over the year: 2 bikes, a cart, access to a storage unit and other necessities — Elden had essentially been robbed.

The Legal Clinic at Loaves & Fishes helped Elden get some of his money back, though he still experiences homelessness.

As I talk to Elden, he points east across the room to a small bindle nestled between the bookshelves in the library, “There’s my house, that rolling suitcase, that’s my world, or whats left of it.”

“What do you have in there that’s most precious to you?” I ask.

“My sleeping bag and the mat I lay on and of course my paperwork, a couple books and pictures — I lost everything. I mean it was total chaos because I have this cancer thing going on which is making me feel so sick and disoriented.

A few weeks ago I saw Elden and I waved to him. He put his hand up as he rounded the corner, entering the rain-soaked parking lot. Small gloomy pools of water dotted the pavement. Their watery darkness reflects back the unbreakable youth within this man. His newly acquired bike, cart, and rolling suitcase all move slow and steady to win a race that has yet to be won.

Please donate to Loaves & Fishes and help guests like Elden.