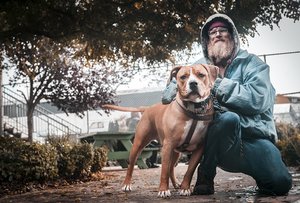 I got out of prison in 2009 and I’ve been homeless ever since. I’ve been going through Guest House and they are helping me apply for social security and once I get my social security, I can try and get housing. But 99% of housing are apartments and apartments don’t allow large dogs. I have a large dog–half Pitbull and half American bull mastiff named Spyke. Most of the housing will not accept my dog. I tell them, “he’s not a dog, he’s a family member.” I’d like to rent a small house that has a little bit of a back yard. That way, he could have room to run so Spyke has a small yard.

One of the things I’ve had to overcome today is depression and at first I didn’t want to get up and come in. It’s cold out there and Spyke looked at me – “uh, I ain’t going out there, it’s cold out there, I’m staying right here under my blankets.” But I knew I had to come in for my social security paperwork and to get my phone on the charger. Librarian helps me out, and Lisa, she’s always gotta cheerful attitude and always brings me out of my depression. Mart is always there so we can put our dogs in the kennel and do what we need to do, get coffee, eat lunch, and the workers here are always helpful. They are always ready with a lending ear and if there is something troubling you, then you are more than welcome to get it off your chest as long as you don’t start getting violent.

Normally I get up when my alarm goes off at 6:30 am. I get up and hook Spyke up to the bike, come down here because they open the gate at 7 am, and the kennel opens up at 7am, so by the time I get down here it’s a little after 7. Sometimes I don’t get here until 8 o’clock. If it’s raining I stay at camp. [when it’s clear outside] On a day like this I’ll sign Spyke into the kennel, go over to [friendship] park, get my lunch ticket and my coffee but the coffee goes real quick. So, I’ve learned to have a small plastic jar filled with Folgers in my backpack, so if there’s no coffee I’ll use their hot water. Then I come over to the library, read the paper and do the puzzles, sign up for the computer, and after that I’ll walk Spyke and go to lunch. After lunch I’ll get Spyke and go do my [recycling] route and I’ll make it back to camp by 4:30 and get all my recycling separated and get it ready to turn in, I let it build up sometimes up to a week. If I know I need to go to the 99¢ store and get food and snacks I’ll go to the one on Northgate and cash in and then go right around the corner to the 99¢ store.

A friend of mine, Alissa, moved to Idaho last year and she could only take her 2 small dogs and she also had 3 large dogs. One she gave away, the second one she let him out onto the levee, and that left Spyke. She didn’t want to take him to the pound or let him loose on the river because the rangers out here have a “shoot on site” law. If they come into a camp and they see a Pitbull, their first action is to shoot the pitbull, whether it’s leashed or not because they’ve got it in their head that all pitbulls are bread to fight.

So, I said, “Hey I need a companion dog, I’ll take Spyke.” He was just about a year old, so I’ve had him for just about a year and a half. When I brought him into the clinic here he was just about 78 pounds. When I brought him back in August to get all his vaccinations updated, rabies shots updated they weighed him and he was 89.7 pounds and they said he still has 2 or 3, maybe 4 years left of growing to do so don’t be surprised when he tops out between 120 or 130 pounds, that’s the bull mastiff in him. I said, “Cool, we’ll be the same weight.”